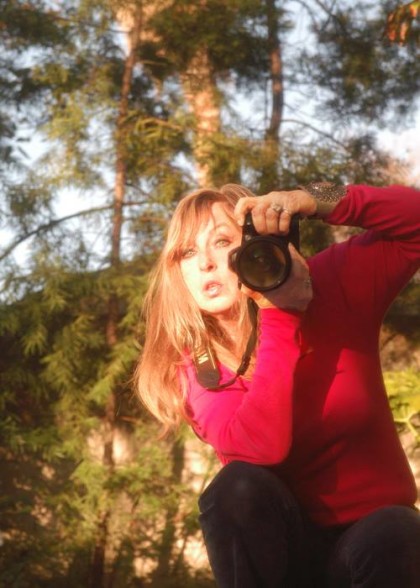 Her work was featured from May – July of 2014 at the Building Bridges Art Foundation Gallery at the historic Bergamot Train Station Arts Center in Santa Monica, California.

Bauknight was one of the first women photojournalists in the South from outside of New York City to Atlanta and while based in Charlotte, North Carolina. Many of her assignments were based on the “Old South” transitioning to the “New South” through economic growth and social integration.

The distinguished photographer received the Honorary Commendation for Humanitarian Activism award presented by the Visual Artists Guild of Los Angeles in recognition of her efforts in Hawaii, China, Ethiopia, and with the Catawba Indians, “to document the humanitarian plight of oppressed and forgotten peoples and to communicate through photography the stories which are often overlooked by society.”

Bauknight was honored by the Native American Studies Center (NASC) at the University of South Carolina – Lancaster (USC-L) during their 10th Annual Native American Studies Week. The year-long exhibition of her still photography documenting “The Renaissance of The Catawba Indians” ran from March through March 2016. Bauknight also presented a well-attended lecture and workshop, “Photography and Collecting History” at the USC-L. Read the two NASC media releases HERE

How Bauknight came to document the plight of the Hawaiian people is a fascinating story in itself. Bauknight said, “I visited Maui for a vacation after years of overseas assignments covering disease, loss of environmental and human rights and the oppression of those who had no voice. During a moment of solitude on the beach, I suddenly realized there was very little visible representation of the host culture in Hawaii; the Hawaiians. After asking “why” and getting no answers, I felt there must be an important reason that the native Hawaiians were practically invisible in their own land. During the following 18-months of research and interviews, several Kanaka Maoli finally agreed to talk to me on camera. Soon, some of their families and friends wanted to ‘talk story’ about the suffering of the Hawaiian people and the strong cultural heritage that has given them the strength to carry on. The common thread I heard throughout the islands was the need for the Hawaiian’s sovereign rights.”

Bauknight’s philosophy is simple: “From my experiences, I believe that culture is the DNA, the common denominator for communications between all people.” Bauknight says, “Hawaiian people remember their compassion for one another and they have a great reverence for the earth. I believe there is a universal shift in awareness and in order to survive on the planet, we must all begin to seek and find this spirit within ourselves.

Catherine Bauknight continues to document cultures and social change through the eye of her camera, capturing social and political scenarios that will soon vanish and one day be experienced only through photography and literature. In addition to promoting her 8-award winning film, Hawaii: A Voice For Sovereignty, she is currently completing a documentary film on the culture of fashion in Los Angeles.

ALSO SEE MEDIA STORIES BY OR ABOUT CATHERINE BAUKNIGHT HERE.

2 Responses to “MORE” from Home Page