MEDIA STORIES BY OR ABOUT CATHERINE BAUKNIGHT

“With the start of this year’s 10th annual Native American Studies Week today, NASC is rolling out a new photography exhibit that fits its mission perfectly. ‘Renaissance of the Catawba Indians’ features the work of Catherine Bauknight, a Lancaster native and nationally recognized photographer and filmmaker who last showed the work in the Rotunda of the U.S. Capital in Washington, D.C. Shot between 1997 and 1999, the photo essay documents the Catawba Indians during the tribe’s cultural reawakening after the historic 1993 Settlement Agreement. NASC Director Dr. Stephen Criswell said he felt honored to have an award-winning photographer and filmmaker with local ties show such an important work at the NASC over the next year.” More HERE

Veteran Pasadena Weekly photographer Catherine Bauknight is about to have a big weekend. Two photographs by the photojournalist and documentary filmmaker will be exhibited at “Photo LA” at the LA Mart building in downtown Los Angeles from today through Sunday, while 10 of her best images were recently added to the archive at Beinecke Library Rare Book & Manuscript collection at Yale University. More HERE

A free public screening of “Hawaii: A Voice for Sovereignty” will be held at 6 p.m. Friday in the Von Holt Room of the Cathedral of St. Andrew in honor of the annual “Feast of the Holy Sovereigns.” The feast, held by the Episcopal Diocese of Hono­lulu, celebrates the founders of the Anglican Church in the islands: King Kame­ha­meha IV and Queen Emma. The documentary tells the story of the Hawaiian people’s effort to be recognized as sovereign people and their goal of re-establishing Hawaiian culture before the overthrow of the Hawaiian monarchy in 1893, according to a news release.

Producer-director Catherine Bauknight said in the release, “I have witnessed firsthand what happens when a small, sustainable society is separated from their land, fresh water and ocean resources and then converted for profit by Western powers.” She continued, “Today, with over 8 million tourists a year, crowding their small and ecologically fragile islands, the Hawaiians are disconnected from their own land and suffer some of the highest rates per capita of poverty, homelessness, health issues related to diet, and incarceration in the state. My goal is to continue to share this tragic story to assist the Hawaiians’ ongoing struggle for sovereign rights and their efforts as stewards of the land to protect what’s left from further destruction.” After the 83-minute screening, a panel of local leaders will discuss issues presented in the film and possible resolutions.

January 23, 2014
Hawaiian Sovereignty Connection to the ‘Aina
By Catherine Bauknight

“Hawaiians have been a thriving sovereign community for centuries in connection with the land. They used the water systems of natural flow from north to south reaching structured fish ponds and the ocean. The land in the flow of the water, designated and patented to the Kanaka Maoli was cultivated by them to grow taro, sweet potato, and other nutritious foods, creating a balanced diet. Medicinal herbs grew and were used to prevent and cure illnesses. They did not fish out of season.” More HERE

Next Saturday, March 31, 2012, the Laemmle Theater in Pasadena will screen the thought provoking documentary by Catherine Bauknight, ‘Hawaii, a Voice for Sovereignty’. Admission is free. There will be a question and answer panel after the feature film is shown, with distinguished panel members who are actively engaged in the Hawaiian Sovereignty movement and its political ramifications. More HERE 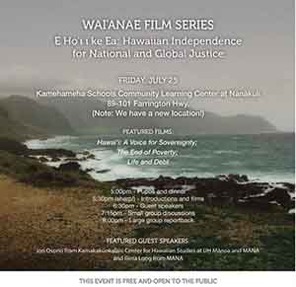 Hawaii A Voice For Sovereignty

July 17, 2014 – HONOLULU — The WAI’ANAE FILM SERIES E Ho’i i ke Ea: Hawaiian Independence for National and Global Justice will present segments from the films “Hawaii A Voice For Sovereignty”, “The End of Poverty”, and “Life and Debt” on July 25, 2014. The event is a community outreach for the purpose of discussions regarding national and global justice. It will be held at the Kamehameha Schools Community Learning Center, 89-101 Fairington Hwy., Oahu, HI. The event will begin at 5:00 P.M. “Hawaii A Voice For Sovereignty” is a documentary film sharing intimate interviews by the Kanaka Maoli educational and cultural leaders, about the developing social, cultural, and political issues of a sustainable Hawai’i. The Kanaka Maoli also speak of the Ku’e Petition in 1897 that protested the annexation of the Hawaiian Islands by the U.S. These are issues and historical facts that are being discussed within the communities of Hawai’i now as the future recognition of a native Hawaiian government is being explored. More HERE NOTE: Three screenings were held in Hawai`i during mid-November, 2013; in Lihue and Koloa, and on November 12 for the Annual Hawaiian Civic Club Convention, and a public screening took place at the Kaua’i Marriott Resort on Kalapaki Beach.