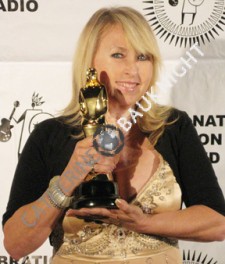 Catherine Bauknight, “A Messenger of Cultural Voices,” is a filmmaker and photojournalist. Her documentary films and photographs elevate social change and communication between people of all cultures. Her film Hawaii A Voice For Sovereignty has won 8-awards, including “Best Global Documentary Film Creating Change” in 2014. It is a beacon for the voice of the native Hawaiian people to sustain their culture and sovereign rights. The trailer can be seen at Hawaii: A Voice For Sovereignty. She is currently completing a documentary film on the connection of culture and fashion in Los Angeles. Often compared to the late Margaret Bourke-White, Bauknight was a protégé and friend of the legendary photographer Alfred Eisenstaedt. More HERE …

With a myriad of photo credits in The New York Times, USA Today, Time Magazine, Newsweek, Rolling Stone, People Magazine, The Huffington Post and others, in September 2016 her photographs from assignments over five continents will be included in the permanent collections of:
– Yale, Beinecke Library
– Women’s Museum, Washington D.C.
– Smithsonian Museum, (Library)
– International Center of Photography/NYC (ICP Library)
– University of Arizona, Center of Creative Photography
– Getty Museum Center (Library)
– Harvard University, The Arthur and Elizabeth Schlesinger Library on the History of Women in America at the Radcliffe Institute for Advanced Study.
The collection of her work at the above institutions is provided by Women In Photography International (WIPI).

Click on the image below to view the collection.